The Outerbridge Lecture Bundle was a hit at the IBM Jacksonville convention and our US lecture tour in January 2016. It is still available at a special price. Included are lecture notes and props for three of our original, audience-tested routines that have been refined over 25 years in theatres, cruise ships, casinos, and television, as well as comedy clubs, schools and birthday parties. A $135 value for only $100!

TIME OF DAY
Ted Outerbridge has reimagined “the best card trick in the world” so that you can predict the Time of Day. This routine was developed for radio and TV appearances, but it blows people’s minds anywhere, and it resets in seconds.

A prediction, wrapped in cloth and tied with twine, is placed in a spectator’s hands. The spectator names a time of day such as “5:45”. When the cloth is unwrapped, it contains a blank-faced deck of cards with specific times of day written on them. One card is upside down – and it is the time of day they named! 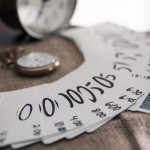 PURPLE CARD
A spectator chooses a jumbo playing card which is then shuffled back into the deck. A water pistol is filled with grape juice. The spectator is given a poncho, windshield-wiper eyeglasses, or other protective clothing, and holds the deck of cards high in the air. After much humorous byplay, the water pistol is sprayed at the cards. The selected card is removed from the deck – splattered with grape juice!

This hilarious routine runs six or more minutes and is suitable for adults or children. The water pistol eliminates the violence issue associated with Bullet Through Card routines, and the grape juice allows for great situation comedy. 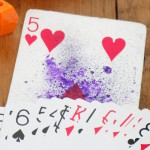 TP PREDICTION
The performer explains that he had an incredible dream about a specific time of day and that he wrote it down on the first piece of paper he could find. A roll of toilet paper is brought out and given to a spectator to hold. Three spectators write their favorite time of day on index cards. A fourth spectator adds up the numbers, and the total matches the prediction – dramatically revealed on the roll of toilet paper.

The TP Prediction reveals the prediction one digit at a time via the unique visual method of unrolling. Toilet paper is a good ice-breaker that adds many comedic possibilities. The routine is bulletproof and the prediction can be seen in very large venues.

LECTURE NOTES
The lecture notes are a 64-page, full-size (8½” x 11″) booklet loaded with full-color photos and valuable information for every type of performer. The lecture reveals the inner workings of a large touring illusion show, including the logistics of touring with a large show, the eight-hour setup, running the show, and striking the show. It also presents valuable insights about marketing, making the most of media appearances, the creative process, the team, and originality. It also includes some funny stories from the road including “The One Armed Loader”, “Load-In from Hell” and “Naked in Germany.” 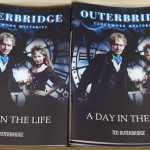