The International Brotherhood of Magicians (I.B.M.) is the world’s largest organization for the magical arts. We were invited to perform in the closing spot at the I.B.M.’s 87th Convention in Jacksonville, Florida, July 15-18, 2015. The Linking Ring is the I.B.M. monthly magazine and the August issue featured a review of our performance which we enjoyed reading!

“The highly creative Montreal illusion team of Ted and Marion Outerbridge presented a beautiful set of illusions with a time theme. Marion’s graceful dance focused our attention on various time pieces spaced across the stage. The team performed a series of appearances, vanishes, escapes, costume changes and more through the undulating rhythm of time. The delightful duo traveled back into time to revisit a 1960s television game show, complete with mirror-ball jacket and audience assistant Bruce. While some performers may lose their head on stage, Ted lost his center torso in a giant clock.

Slowing the pace a bit, Ted presented a beautiful Gypsy Thread routine centered around a story of family values. To close the act, Marion secured Ted into a classic straitjacket and helped him into a box raised above the stage. The box flew open to show Ted and the straitjacket gone. Ted immediately reappeared beneath a glowing spot in the back of the auditorium. The audience rose once again in a very well deserved standing ovation.” 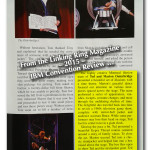 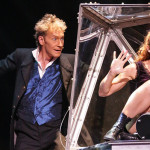 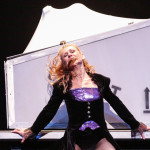