TP Prediction allows you to predict the time of day and it also allows you to reveal your prediction in a very dramatic fashion. By working with toilet paper which is inherently funny, you can unroll the paper and reveal your prediction one digit at a time. This builds suspense and makes the final revelation that much stronger. We developed the routine to play a variety of venues from comedy clubs and casinos to cruise ships and theatres. It is our favorite packs small plays big comedy prediction and it is visible from the back of a 1000 seat theatre.

TP Prediction comes with a detailed script and instructions which include 20 years of refinements. A set-up pad is included and refills are easy to find 3×5 blank file cards. If you have ever tried to write or draw on toilet paper you know it is next to impossible as the paper tears. We supply you with a stencil so you can daub the prediction on using a magnum Sharpie. (not included) By the way TP Prediction stands for Ted’s preferred prediction! You can watch the video here!

“This is a fun routine… the instructions are written well and it delivers what it promises.”
JOSHUA KANE│M-U-M MAGAZINE

“A now-popular technique for stage mentalists and magicians to reveal a written production is the unfurling of a roll of paper across the stage. The first time I saw this was in Derren Brown’s stage show. It played very big. So I guess it was just a matter of time before a professional from the magic community tried it with a roll of toilet paper. We know that magic with toilet paper is a proven laugh-getter. Mike Caveney and Tom Burgoon, two of the biggest names in comedy magic, have signature routines with it.

Ted and Marion Outerbridge are Canadian illusionists who tour theaters. “TP Prediction” is one of Ted’s routines possession of an audience member, is tossed onto the stage. While the spectator holds one end, Ted slowly unrolls the TP, revealing four large numbers surrounding a colon that make up the chosen digital time. You can see Ted talk about the routine and show a brief clip huge, and because a roll of paper is an everyday object which is incongruous within a theater setting, there are s•••loads (see what I did there?) of room for humor, from clever wit to downright filthy.

Obviously, you’ll want to make this trick fit your own style, perhaps predicting a word,Of course, you can do Ted’s routine for which he’s included a special stencil so you can create digital numbers that look printed (using his special technique) on the otherwise hard-to-write-on super absorbent paper. Additionally, he gives you the necessary prop, easily found at a dollar store, to force the number. Finally, you get a small booklet of instructions that include his exact patter, a few tips, and suggestions for the best (seriously) bathroom tissue to use. You supply your own roll. audience member name, or date instead of a digital time.

I highly recommend “TP Prediction” for those of you looking for an interactive comedic prediction or coincidence effect. Mr. Outerbridge’s routine has a proven success record and it has enough flexibility to fit the stand-up act almost any competent full-time or part-time professional.”
DANNY ORLEANS│GENII MAGAZINE

“The very first time I saw Ted perform his great TP routine I was jealous and wanted to steal it. But I never did! Now that Ted finally released his commercial routine, my misery is over! Thanks Ted!”
PATRIK KUFFS│MAGICIAN 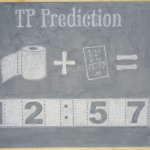 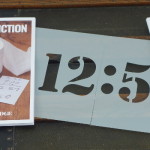 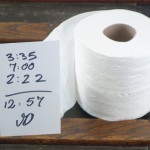 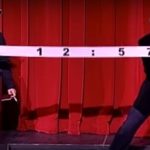 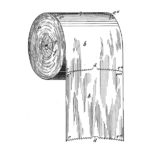