The latest issue of VANISH Magazine reviewed three Outerbridge Magic products and gave them all a “VERY HIGHLY RECOMMENDED” rating!

I have been using this now for over a year both at magic conventions and at every walk-about gig I do. I review thousands of tricks and very few actually end up in my day to day show – TIME OF DAY is one that has made it.

You receive a hand-made deck of cards – I can’t believe each deck is custom made but it really does make a difference in look and feel. The method is based on an old principle however it has fooled some knowledgeable magicians because of the routine and premise. Ted has done a great job producing this and it comes with Jute cloth wrapped in twine. A very nice old fashioned look. You also receive a set of instructions that fully explain the workings.

The basic effect is that a spectator can name any time of day such as 12:15 and you take the deck showing every card has a different time on it except one, which is reversed. The reversed card is 12:15. The idea of using time is perfect for my presentation as it is the theme of my act. Most of my effects are based around going back and forward in time etc. so this is the perfect routine for me.

The great thing about this is that it is self-working and instant reset making it ideal for walk-about. The other nice thing is that it’s not a card trick. This is definitely one trick that goes with me everywhere – it’s easy for the audience to follow and very direct. Nothing to setup as all the work is done for you. I have had my deck for over a year now and just re-ordered another so they last a long time. Considering each one is handmade I think this is a bargain.

If you watch the promo on the website you will see a live performance of Ted performing this on radio. This is the PERFECT routine for radio performances as well. 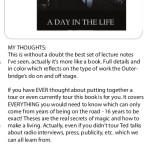 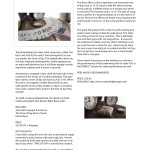 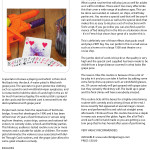 This is without a doubt the best set of lecture notes I’ve seen, actually it’s more like a book. Full details and in color which reflects on the type of work the Outerbridge’s do on and off stage. If you have EVER thought about putting together a tour or even currently tour this book is for you. It covers

EVERYTHING you would need to know which can only come from years of being on the road – 16 years to be exact! These are the real secrets of magic and how to make a living. Actually, even if you didn’t tour Ted talks about radio interviews, press, publicity, etc. which we can all learn from.

“What a great routine that will play just as well for adults as it will for children. There aren’t too many effects like this that cover a wide range of audience ages. This can be done surrounded, in cabaret, on ships, at birthday parties etc. You receive a special card that will be your final card covered in juice as well as the special deck that makes this so easy to do plus a set of instructions with

Ted’s script. If you go online you can also find a performance of Ted doing this in the 90s on a television show – it’s in French but shows how great of a routine this is.

This is definitely one of those effects that packs small and plays VERY big. You can perform this in small venue such as a home or in a large 1500 seat theatre on a cruise ship.

The jumbo deck of cards is bicycle so the quality is very high and the special card supplied has been made to be visible from a large distance covered in what looks like grape juice.

The reason I like this routine is because it has a lot of by-play in it and you can take it further by adding some extra funny dress up pieces such as windshield glasses, etc. Of course nobody will get sprayed with grape juice but they certainly think they will. The buildup is great and the final climax will have everybody amazed.

This routine ticks all the boxes for a highly entertaining routine with comedy and a strong climax at the end. I know recently Ted appeared at several magic conventions and performed this and sold out straight away afterwards. I think we’ll see this routine become a staple in many acts around the globe. Again, like all of Ted’s work each until is hand made so you are getting a custom prop that he has honed after years of performing.